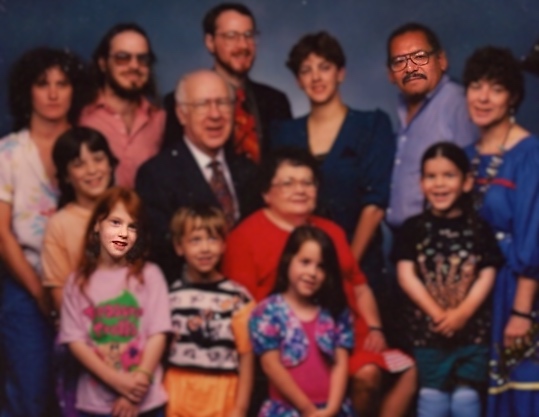 Twenty-five years ago, I got a call on a Saturday morning that had me racing out the door within seconds. My sister had been beaten by her husband. As I drove at breakneck speed between our homes my heart, like the Grinch’s heart, constricted as I thought about that man!

My sister’s now ex-husband Richard had chipped her ribs and bruised her body when he came in from a drunken all nighter.

I have not forgotten. I also did not forgive him for two decades.

In those two decades I spoke ill of him at every opportunity. My stomach became a knot when his name came up. My face turned red and I could feel the anger rise in me when I remembered.

It wasn’t until my daughter, my beloved ginger haired baby girl began a writing project about Richard and his role and relationships within our family that my heart was finally released from its grinch-like prison.

My daughter Jessica barely remembered Richard but traveled to Wisconsin to see him. She later spoke and wrote about a deeply wounded but good man who was suffering the consequences of many bad life choices.

Somehow, and I don’t quite know how, my daughter helped me to forgive Richard. Somehow I released my anger and my constricted heart grew.

I did not and have not forgotten.

But in the releasing of my anger and hatred for him, I discovered some of the royalty within not only myself but in him. I glimpsed the image of God which we both share as human beings.

Like Loading...
I talked to Beth on the telephone frequently during those years. The truth is she did most of the talking. Sometimes, I half-listened. I was raising my children. I was working too many hours. While her daily calls were sometimes a distraction, I was blessed to live in the same city as my sister.

Decades later I don’t remember much about our conversations. Mostly I remember feelings: contentment to be near my sister, worry about her, joy as we talked about teaching, and frustration that no matter what I said or did she didn’t seem to be genuine. Why does she have to put on such a charade?

A few days (weeks?) before the telephone rang, I learned why she put on such a charade. I learned the secret she was hiding. I learned why my sister had to hold herself in so tightly, even in our phone calls.

Sometimes, I cringed at the phone ringing. I spent my days talking with people either in-person or on the telephone. The last thing I wanted was to interrupt my family time on a Saturday morning. Typically, I would let the answering machine pick it up. This time was different.

I felt compelled to answer.

Could this weak, dull voice belong to my sister? The musical voice (some would say sing-songy) I associate with my sister lacked affect. There were no ups, no downs, just monotone. “I think he broke my rib. He’s not here right now.”

A few days (weeks?) before the telephone rang, my wife and I’d sat with Beth and her best friend. The three of us tried to convince her to leave her husband. She assured us that he hadn’t gotten physically violent. We all knew firsthand how verbally abusive he could be, especially when drinking, and feared the worst for her but she wasn’t ready.

Within moments I was out of the house.

She looked as bad in person – worse because she was bruised – as she did on the telephone. She fell against my body, clinging to me. She grasped me tightly despite her body bruised by the man who swore at their wedding to respect and love her.

Our day wasn’t over. Her husband came looking for her when he realized she’d left him.

He showed up in our front yard.

Slurred speech and abusive language echoed through our neighborhood. Loud, foul language was interspersed with his calm, syrupy sweet, “I just want to talk to her” manipu-talk. My sister hid, cowering and crying in my seven-year-old daughter’s bedroom. We called the police refusing to open the door upon which he pounded his fist.

In the days to come, I accompanied Beth to courtrooms, to women’s violence protection services, and to medical facilities. In the days to come, I learned more about the man who cracked my sister’s rib in a drunken rage. I heard horrifying stories of a man so controlling and angry (and too often drunk) that he abused the woman he claimed to love.

This is personal. This is family. This is about my sister. It is also about my daughter, my wife, my nieces, my aunts, cousins, grandmother, mother, and friends. It is about your family. It is about our human family. Will we limit legal protections, as some in Congress voted to do yesterday, or will we do all within our power to protect everyone?

Will we turn the other way when the telephone rings? It’s ringing now.

We sin against you,

when we harm one another,

and use others as objects to be controlled.

We cause you to weep,

when we fail to be your love on earth.

We allow our own pains,

and our desire for power,

to trump caring for every one of your beloved.

Forgive us when we,

look the other way,

and when we fail to provide protections

to all of humanity particularly the weak and vulnerable.

Remind us that we,

are called to be stewards of creation,

caring for each bird,

and each of our human kindred.

Help us to reflect your image within us,

by creating a culture of respect,

and responsibility between us.