We are the 99%! This catchy and effective mantra of the Occupy Wall Street movement is helping protesters to point out the shameful disparity in power and income in our country. I fully support and stand with the protesters. The growing gap between the haves and have nots is troubling and has infected our political system and governance. In short, money talks. Money buys power. Money and power isolate the 1% from the 99%. 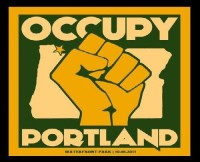 I have no doubt that Jesus would stand with the disenfranchised, the poor, the marginalized. (See especially Matthew 25: 31-46 but also read the full breadth of Jesus’ teachings.) He stood with the 99% over two-thousand years ago. A core tenet of faith for followers of Jesus is care for all but particularly for the “least of these.” Liberation theologians, with whom I have much affinity, believe that Jesus professed a “preferential option” for the poor and oppressed peoples of the world.
My concern is that a small minority of the rhetoric of the Occupiers demonizes the 1%. As a follower of Jesus, the One who fully took in the breath of God and responded lovingly to God’s luring, I believe that both the 99% and the 1% possess the Divine within them. When we demonize the 1% or the 99% or any individual or group, we have failed to respond to God’s will. When we demonize others, we imply that they are less than human.
When we demonize the 1% we undercut the implicit claim of the Occupy Wall Street movement: all people are worthy of the abundance of the Earth’s resources.
Human beings are social, communal creatures. As such, we instinctively know that we need one another. The infant reaches out to the parent for nourishment and protection and receives it. “Is there anyone among you who . . . if the child asks for an egg, will give a scorpion?” (Luke 11: 11a, 13b NRSV See in context.)
We are the 100%. Those who use their power and money for their own gains at the expense of the whole should and are being called out for their excesses, just as I am calling out the minority among the Occupiers who demonize the 1%. The well-being of each individual and of the whole of humanity is harmed by current global economics. We are all interconnected whether we like it or not.
When the Occupiers call for a more equitable economic system, for a voice in the political system, for a level playing field, they are calling for something that is good not just for the 99% but for the 100%.
We are the 100%, each of us created in the image of an abundantly loving God who has provided enough for all of us. Our job is to share.
Now the whole group of those who believed were of one heart and soul, and no one claimed private ownership of any possessions, but everything they owned was held in common. With great power the apostles gave their testimony to the resurrection of the Lord Jesus, and great grace was upon them all. There was not a needy person among them, for as many as owned lands or houses sold them and brought the proceeds of what was sold. (Acts 4: 32-34 NRSV See in context.)