Many Christian arguments against marriage equality are rooted in flawed — even heretical — assumptions. Though perceived as hateful, these Christians often claim that they “hate the sin but love the sinner.” It is this very statement that indicates the reliance on the heresy of dualism. Our Christian hesitancy to talk about sexuality within churches is also victim to this flaw.

The Heresy of Dualism

Heavily influenced by Greek thought, Christianity developed a strong sense of the goodness of the spirit and the sinfulness of the body. One group of early Christians, the Gnostics, even thought that Jesus did not really inhabit a human body. The divine could not be divine within the profane human body. By the end of the second century, this hatred of the body was declared outside of the Christian faith. Yet, it persists in the mindset of many twenty-first century Christians. 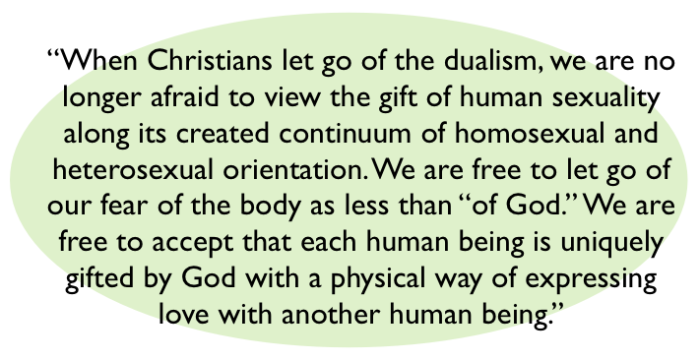 Yet, an attitude toward our bodies as profane has permeated Christianity throughout the centuries. The Puritans are an American example of groups who have taken this heretical dualism to the level of self-hatred. Modern churches are also places where the belief that sexuality (the body) is so profane that we don’t even talk about it. In the church, we have allowed a culture of titillation to define human sexuality.

The Sin of the Church: Dehumanizing Non-Heterosexuals

Within this context churches and individual Christians weigh in on the morality of homosexuality. When many hear the word heterosexual, “hetero” stands out. When they hear homosexual, “sexual” stands out. For too long we have viewed heterosexuals as whole human beings while viewing homosexuals as only about sex. The common heresy of flesh as evil further dehumanizes our gay and lesbian brothers and sisters.

In the dehumanizing of and refusal to accept homosexuals as Imago Dei, we allow fanatics to spew words of hatred and violence. In our refusal to accept our lesbian and gay sisters, brothers, sons, daughters, aunts, uncles, fathers, and mothers as made fully in the image of God, we commit sin. This is the great sin of too many contemporary churches.

Dualistic Thinking in Arguing Against Homosexuality

The argument that one can love the sinner while hating the sin when applied to homosexuality is dualist thinking. The separation of orientation from practice regarding homosexuality leads to a separation of the spiritual from the physical. My heterosexuality is intertwined with my spirituality, with my sense of who I am as a child of God. In the words of theologian Christopher Morse, “The way God makes us in creation, including our sexuality, is [n]ever a cruelty joke. . . .No gift of God’s grace is to be held in dishonor.”

When Christians let go of the dualism, we are no longer afraid to view the gift of human sexuality along its created continuum of homosexual and heterosexual orientation. We are free to let go of our fear of the body as less than “of God.” We are free to accept that each human being is uniquely gifted by God with a physical way of expressing love with another human being.

The first testament is littered with examples of God’s loyalty and compassion within covenant to God’s people. In Judges 10, after years of idol worship, the Israelites seek God’s help when under threat from the Ammonites. God is rightfully angry with their newfound faith: “Go and cry to the gods whom you have chosen; let them deliver you in the time of your distress” (Judges 10:14 NRSV). Despite rightful frustration, God “could no longer bear to see Israel suffer” (Judges 10: 16b NRSV). God responds in compassion and honors covenant. It is this covenantal relationship that serves as a model for our human relationships, including our sexual relationships. When we express our sexuality–homosexual or heterosexual–within the covenantal relationship of marriage we are living more fully into the image of God.

God’s model of covenantal fidelity has been institutionalized by both the church and secular culture. Though not guaranteeing faithfulness, marriage supports stable, covenantal fidelity in American culture. By rejecting same-sex marriage we are denying homosexuals a tool that supports loving covenants. Americans have a duty to defend equal marriage rights for gays and lesbians. Doing so is consistent with our highest American ideals. We each will benefit from the stabilizing influence on our society.

7 thoughts on “A Christian Case for Marriage Equality”