My brothers and sisters, when you show favoritism you deny the faithfulness of our Lord Jesus Christ, who has been resurrected in glory. (James 2:1 CEB)

If you like folks who get right to the point, you gotta love the writer of 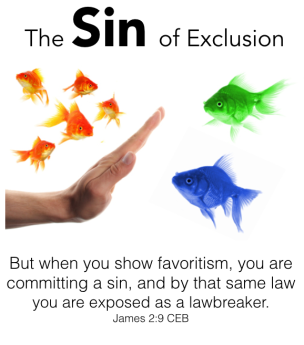 James. Unlike Jesus who tended to favor parables that often had to be explained to his disciples, James doesn’t mess around.

Writing between the years 60 and 80, James is writing to Christians and non-Christians alike. We don’t know who he was for sure. The tradition that tells us he was Jesus’ brother is doubted by most contemporary scholars.

James’ primary audience included two groups: the extremely poor and the working poor. The extremely poor were the folks who barely survived. They had to beg just to eat. If no one took mercy upon them, they would die.

The working poor were the folks with jobs but not very good jobs. They were typically taken advantage of by their wealthy employers. When they were not paid wages due — which happened too often — they did not eat. Too many days without pay and they would be in the same position as the extremely poor. They, too, would be facing starvation.

Hear James as he speaks to this group about their favoritism:

The working poor have turned away from their Jesus-taught obligation to God’s justice. They have instead turned toward the values of this world. Writes scholar Aaron Uitti,

“Their favoritism for the wealthy aligns them with the world and places them at odds with God (4:4)… [but] it is not possible for them to have it both ways—to claim the faith of Jesus and to discriminate against the poor.” (Feasting On the Word, loc. 1578-1584)

In the words of James,

You do well when you really fulfill the royal law found in scripture, Love your neighbor as yourself. But when you show favoritism, you are committing a sin. (James 2:8-9a CEB)

There’s a bumper sticker. (I used to have one on my car ten to fifteen years ago.) The sticker reads: “If You’re Not Outraged, You’re Not Paying Attention.”

James should make us squirm.

If the western church doesn’t squirm, we’re not paying attention to James’ indictments. In James’ age, the church was still made up primarily of the poor: the extremely poor and the working poor.

It makes sense when you read the gospels. Jesus and the writers of the gospels lift up the dignity of those at the edges of society and offer hope. One out of every ten verses in the first three gospels deals with poverty and social injustice. In Luke, it is one out of every seven verses. (Feasting On the Word, loc. 1657).

Theologian Elsa Tamez reminds us that,

“For James poverty is the result of a scandalous act of oppression.” (The Scandalous Message of James, p. 23)

If the Bible is the authority through which we primarily hear God, then it is clear that we ought to be more concerned about poverty and social injustices. If we claim to be followers of Jesus, that means more than believing the “right” things. It means heeding the lure of the Holy Spirit and being Christ and doing God’s work in this place.

We worry about those inside the church more than those outside.

You do well when you really fulfill the royal law found in scripture, Love your neighbor as yourself. But when you show favoritism, you are committing a sin… (James 2:8-9a CEB)

We favor ourselves at the expense of the poor and those living on the margins.

Consider that how we spend our resources — our money, our time, and other wealth — reflect what we value. For example, in this very church, we spend thousands and thousands upon thousands for building maintenance and heating.

We spend thousands on a building that is empty most of the time and we sent less than $250 to One Great Hour of Sharing.

This example is not the whole picture but no matter how we slice it, our expenditures imply we are more concerned about maintaining the institution known as Condon United Church of Christ than we are about anything else.

While I know that not every one in this room lives in the lap of luxury and some of us do struggle financially, I also know that there are plenty of folks in this community who struggle under significant burdens of class and poverty who are not here.

We are not totally homogenous in this room but we are far from reflective of the demographics of Condon or Gilliam county.

Somehow, we are sending the message that we are not as open and welcoming to the poor and near-poor as we’d like to think we are. I have had more than one non-middle class person confide in me that when they’ve visited here, they’ve felt uncomfortable and excluded.

Now, I know that you all are loving and caring folks. Absolutely.

I feel it. You feel it. That is real.

I am not implying that we mean to exclude others…

Somehow, however, we are not always as welcoming to everyone as we mean to be. Somehow, we favor those like us more than those different from ourselves. Somehow, we have at times inadvertently excluded others.

If we are to respond to James’ indictment to avoid favoritism, something has to change.

For starters, We must confess that we have sinned. We have excluded others — whether intentionally or unintentionally. And we need to pray about it, talk to one another, and begin to reach out to those who make us uncomfortable.

We live in a very different world than the first readers of James’ letter. Still, James’ God-inspired words have something to say to us. God uses James to speak to us across the millennia.

The question is how will we respond to those words?